A STUFFED owl, that went walkabout from a popular East Oxford pub, has been safely returned to the hostelry after an appeal to track it down.

‘Hooty McOwlerson’, also known as ‘Owly’, a taxidermy owl, was stolen from The Star Pub, on Rectory Road last week.

After realising he had gone, landlord Gus Rogers appealed to the thief to return the bird. He was eventually returned after a pub regular spotted Owly at a student party. 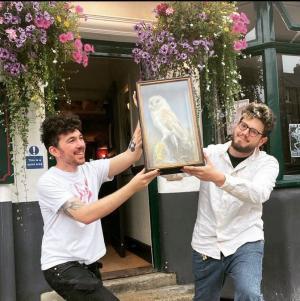 Gus said: “We realised he was missing mid last week and some of our locals mentioned they hadn’t seen it for a few days.

“We assumed it had been stolen as it was one part of the pub décor we hadn’t got round to nailing or gluing down yet.

“After our social media appeal, we got a tip-off from a guy who had seen it at a house party a couple of weeks ago – he had reached out to the students at the house to see if we could get it back.”

Soon enough a student brought back the owl, saying that ‘some boys’ had left it at her house following a party.

After Hooty was returned, the pub threw a ‘welcome home party’ with a ‘very special own DJ set’ to celebrate his return. 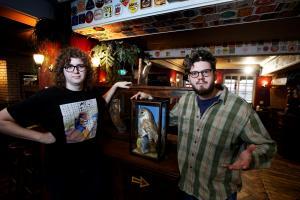 Celebrations at the safe return of Mr McOwlerson were short lived, however, as Gus realised another item had also mysteriously disappeared.

He said: “We started checking other bits and bobs around the pub and noticed one of our twin woodpeckers was now missing.

“Woody is fortunately in perfect view of one of our CCTV cameras, so I looked back at the footage, and after only five minutes found the exact moment when Woody was yanked off his screws and shoved in a bag by a couple of merry bird-smugglers.”

Woody is yet to be returned.

Gus has made it clear that whoever stole the stuffed bird will not be in trouble, and that he just wants him home.

He added: “We’ve all done silly things after we’ve had a few, and we don’t want to get anyone in serious trouble, but the Owl was a gift from our dear friend and avian-taxidermy aficionado Jonny Gaymer, so it was a sentimental part of The Star.

“Willy the Woodpecker is looking very lonely without Woody so we’re very keen to just get him home safe.”

Gus and his partner Anna Thompson took over the East Oxford haunt in February 2020.

The pair were faced with a turbulent start, with three national lockdowns as well as regional restrictions which affected when and how the pub could function.