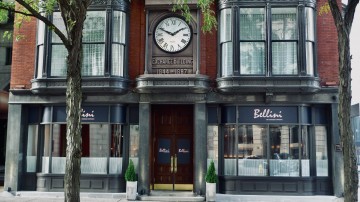 The Beatrice Hotel was one of the successes of 2021. While some other edifices were completed during the year, many seemed out of date and not very “Providence.”

Will Morgan, GoLocal’s long-time and nationally respected architectural critic, wrote about The Beatrice:

The Beatrice Hotel is a jewel. The boutique hotel that opened in downtown Providence on September 1st is the kind of hostelry that our historic city deserves, but rarely gets.

Realized in a restored 19th-century bank, the Beatrice is in triumphant contrast to the recent uninspiring new chain hotels, such as the Residence Inn, Aloft, and Homewood Suites.

Developer and former mayor Joseph Paolino, Jr. rescued and revitalized the Exchange Bank, a handsome, five-story commercial block. This hotel shows how we can create desirable business spaces that enrich the cultural landscape of the city.

The revitalization and transformation of the existing building seems so much more than some of the new hotels that opened like the Aloft, which seems a lesser version of a 1990’s W Hotel.

The Beatrice puts a win in the column for the architecture firm ZDS and for Jen Romano who drove the project from inside Paolino companies.